The Julius Lehrkind Brewing beer barrel wagon, once half-buried in an equipment boneyard on a ranch in Bridger Canyon, is now restored to its original condition and serving up another round of genuine craft beers. It made its way to the ranch around the turn of the 20th century when Julius sold it as his beer bottling and distribution were streamlined. When in use at the brewery, it hauled kegs to local taverns across Southwest Montana and to the Lehrkind bottling plant in Livingston. The driver was perched upon its distinct and precariously high driver’s seat, to see past beer barrels stacked three-high.

In 2014, rancher Lyle Woosley found the decaying wagon on his property and enlisted the help of a professional wagon restorer to unearth it and track its history back to Julius. With help from the Lehrkind family, it’s been brought back to working condition and historical standards. Now, the wagon is proudly pouring craft beer and a little history back into the community. 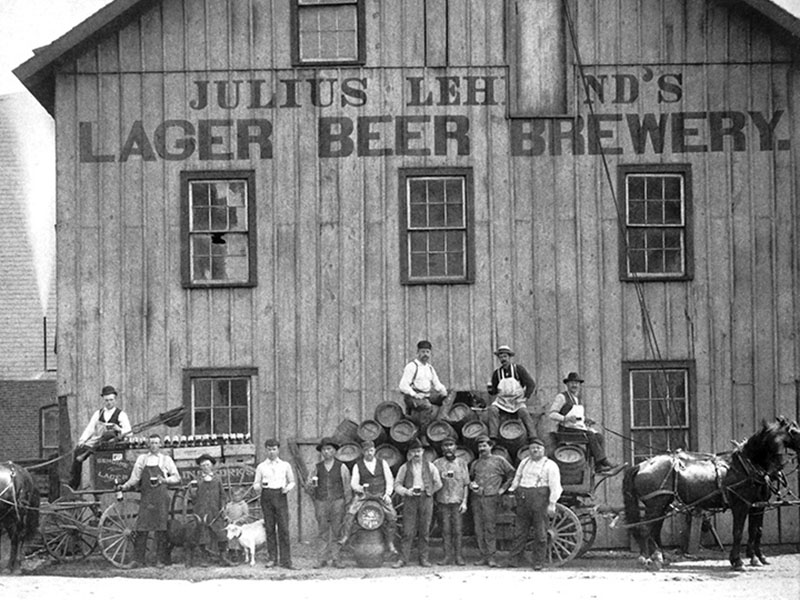 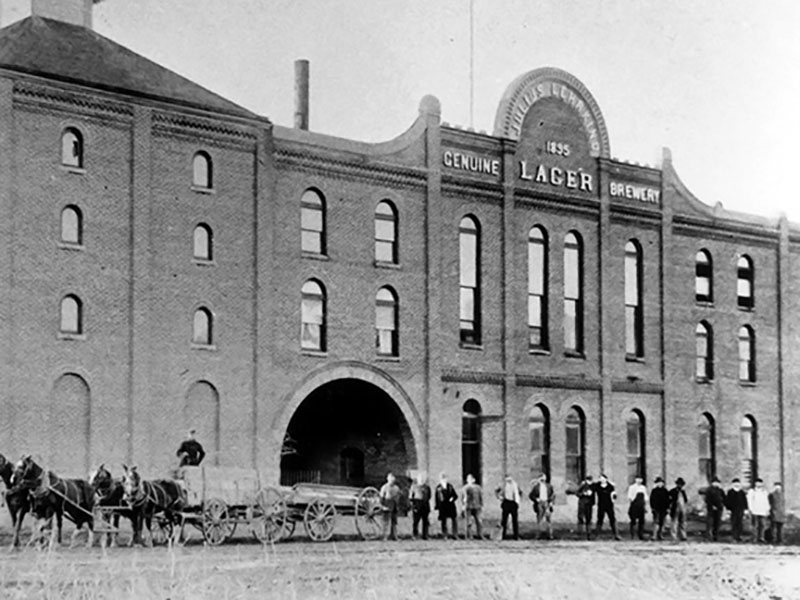 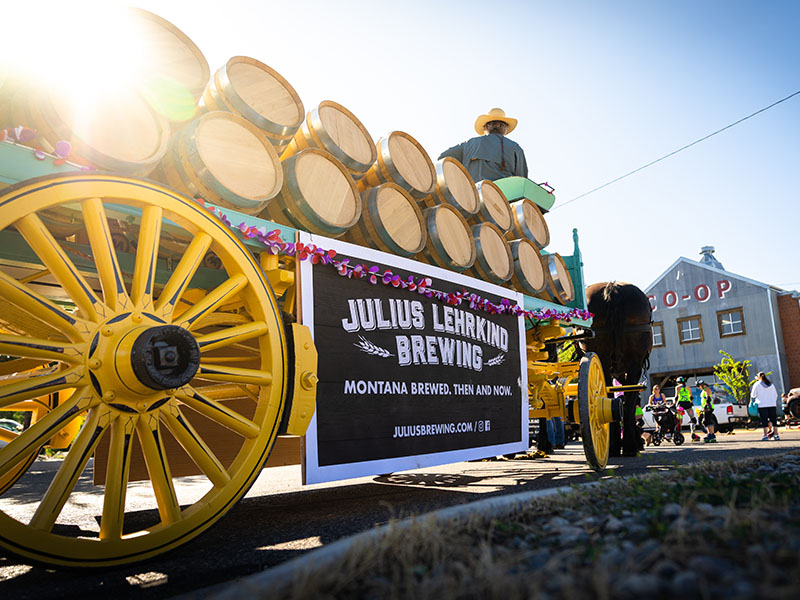 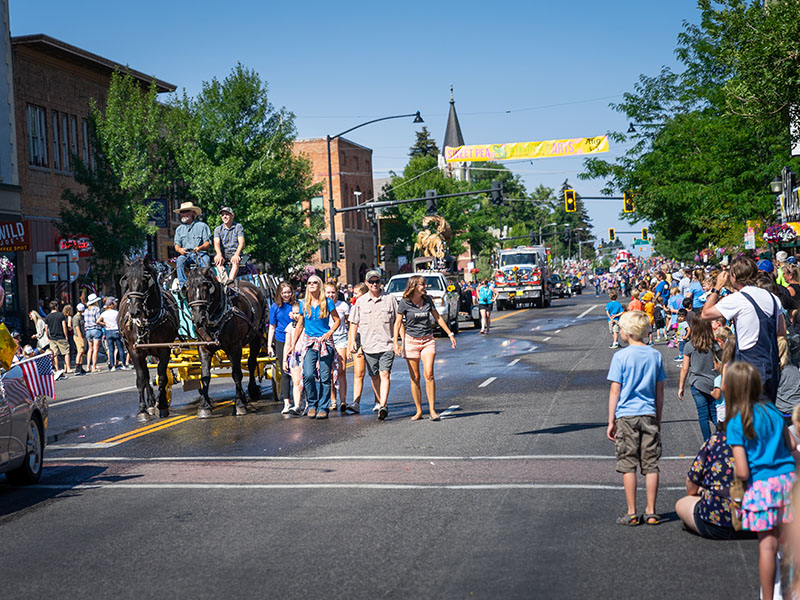 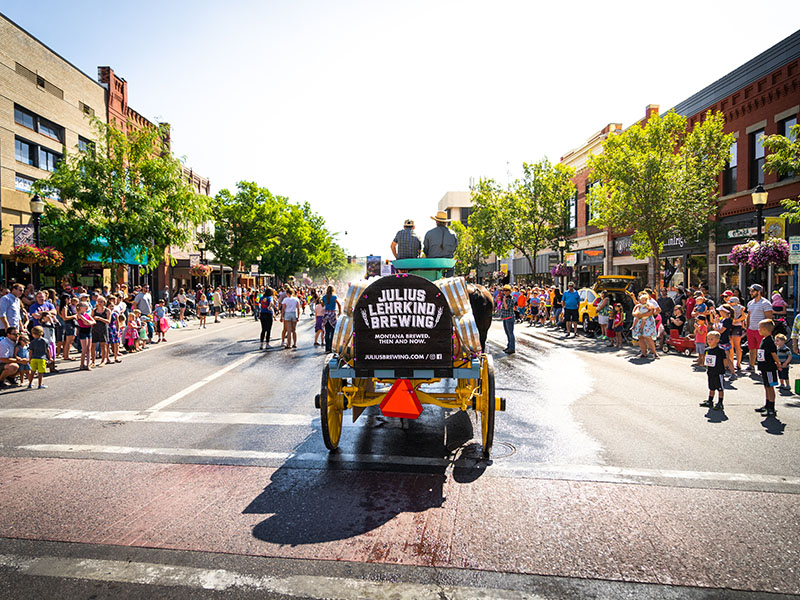 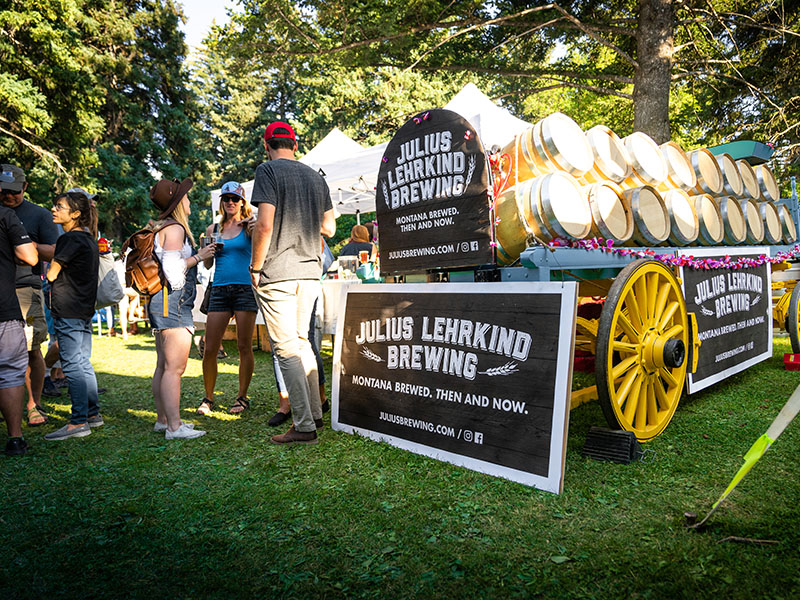 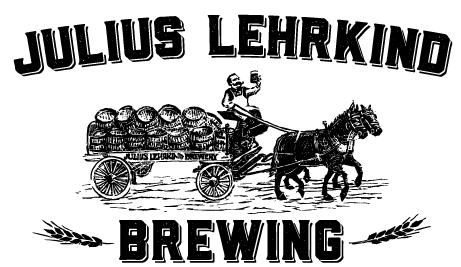 The wagon featured in the Julius Lehrkind Brewing logo is one of the brewery’s original beer barrel wagons. It pays tribute to Bozeman’s brewing history which began over a hundred years ago at the original Julius Lehrkind’s Brewery.

We are thrilled to honor Julius’ legacy and bring back Montana’s original craft beer.
PROST. 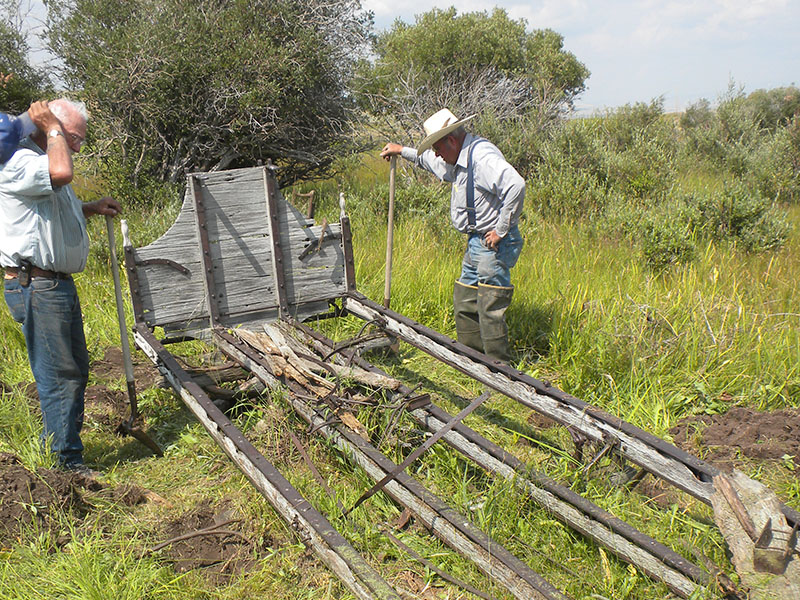 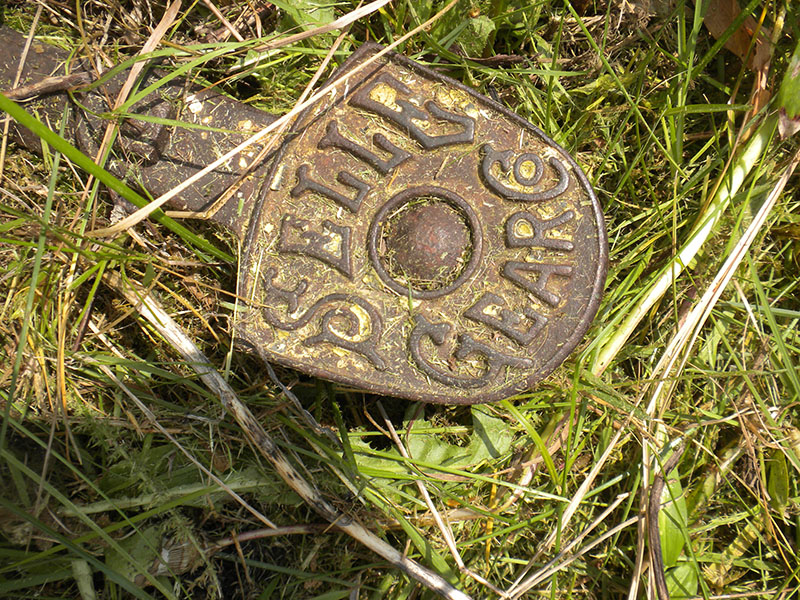 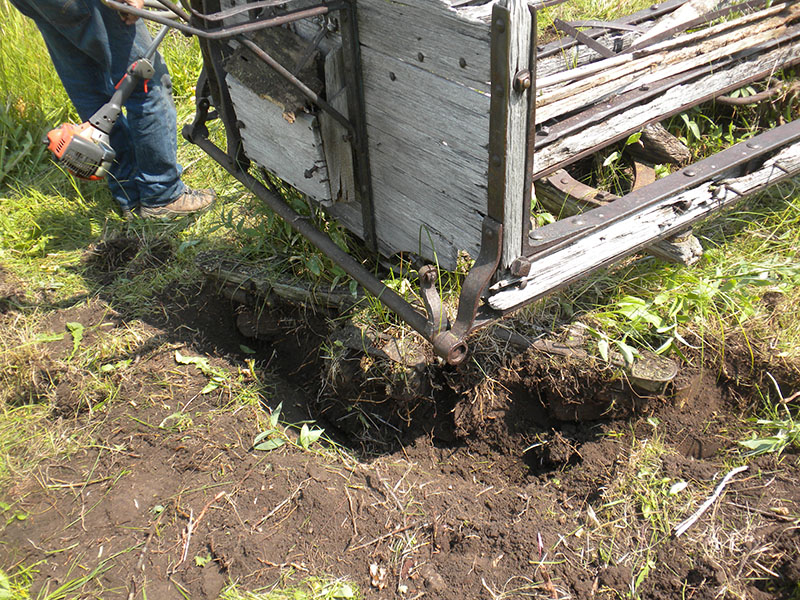 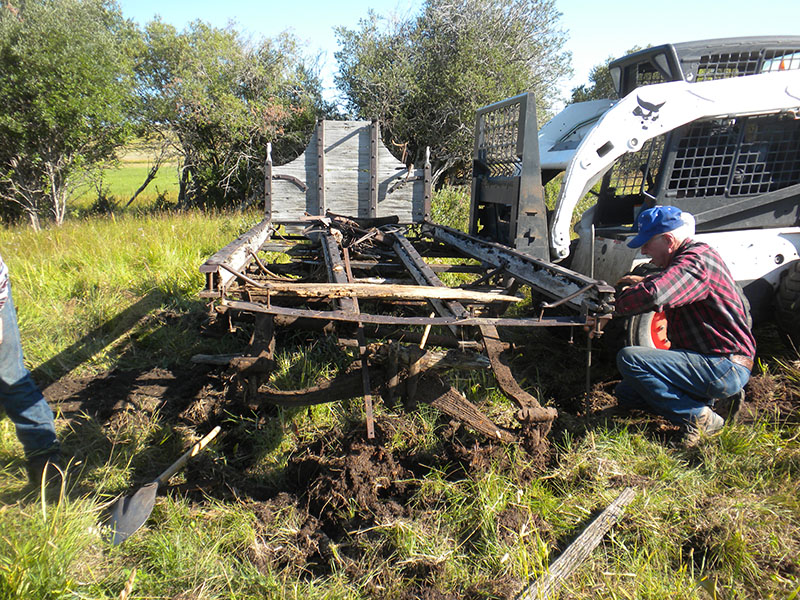 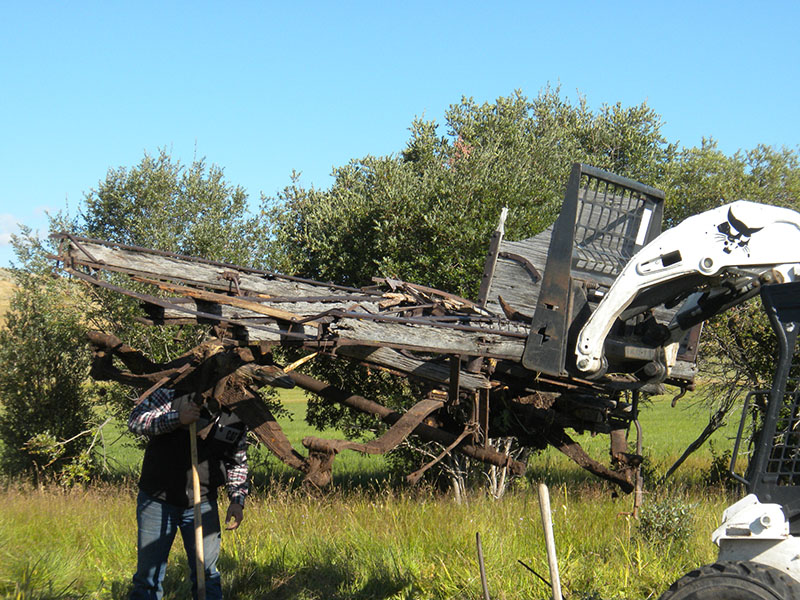 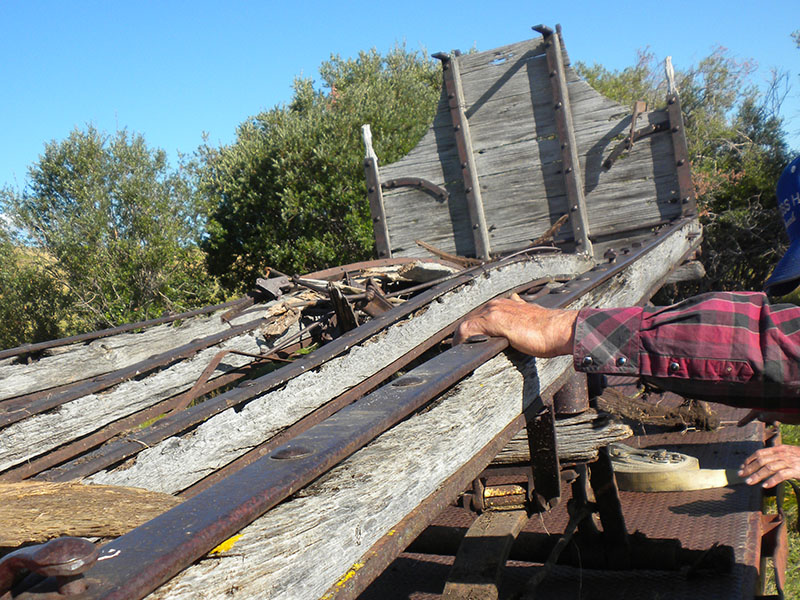 A couple years ago, on a warm summer day, Sedan rancher Lyle Woosley contacted retired rancher Dan Hurwitz to see if he was interested in checking out a couple pieces of an old horse drawn relic half buried in two different locations on his ranch. Lyle knew that these pieces were remnants of an old beer barrel wagon from the years of his grandfather’s ranching, and he knew that Dan liked dabbling in the rebuilding of buggies and wagons. Thus began a most interesting exploration of wagon history and Montana history that goes all the way back to a young Julius Lehrkind fleeing Germany as a stowaway to America around 18601, the incorporation of the Selle Gear Company in Akron, Ohio2, and homesteaders locating their ranch in the east Bridger foothills, all in the exact same era.

In the unraveling of this history, several players are so essential that the story would not have unfolded without them.

Julius Lehrkind just happened to have completed a brew master apprenticeship before leaving Germany, which led to his finding work in a Philadelphia brewery. After opening and then closing his own brewery in Iowa, where the state had jumpstarted its prohibition laws, he packed up his family and business, put them on the train, and headed west to find his future home. According to family legend, he picked Bozeman because he liked the quality of the water and the easily accessible barley produced by nearby Dutch farmers. An immense lager brewery was built on North Wallace Avenue, complete with a malting house, wells, and cork-lined refrigeration rooms. As successful as he was, he opened other brewery and saloon businesses around Montana, and built an extraordinary home next to his Bozeman business known today as the Lehrkind Mansion B & B. But prohibition eventually reached Montana, too, forcing the closure of the brewery in 1919. Julius Lehrkind died just a few years later at age 79, perhaps from despair at the loss of his great enterprise.3

Lyle Woosley’s great grandfather homesteaded the family place on the east slope of the Bridger foothills in the late 1800s. His great grandmother became the postmistress, and needing a name for postal delivery, she dubbed it Sedan after the home she left in Sedan, Kansas. Lyle’s grandfather, Henry, took over the ranching with the equipment of the day, including a mower, buck rake, hayrack, and stacker, the latter of which was Lyle’s first job.

Harlan Olson is a modern day professional rebuilder of vintage horse drawn vehicles with his business, High Country Horse Drawn, located right across the Bridger Range from Sedan. Perhaps his father’s early military career as an engine room mechanic stirred up Harlan’s childhood obsession with model cars, engines, and old wrecks. About the time he met his wife, Joal, he was working in a hardwood lumber yard in Colorado fixing any and everything wood, from instruments to cabinetry. His teacher and mentor firmly believed the best teaching model was to “screw up first”, so Harlan’s on-the-job lessons about the feel of wood, the types of wood, the qualities of wood, and the capabilities of wood, never left him. A family business brought the Olson’s to Bozeman. After collecting an old pickup from a field, a sleigh from a garage sale, and an old driving horse from an insistent friend, Harlan started developing his childhood passion of restoration, soon turning a hobby into a full-fledged business.

The missing link among these people is an immense beer barrel wagon that very possibly got its start at the Akron Selle Gear Co. before ending up in Montana. The clue is the stamp on a heavy metal step on the front running gear of the wagon, saying “Selle Gear”. A 1911 Selle Gears ad for horse drawn vehicles illustrated front platforms, spring express gears, break gears, giant trussed gears, and ambulance gears, touting “1000” styles and sizes of wagon gears on to which smaller manufacturers could build their own bodies to “special order of their customers, then mount them on an undercarriage that would suit the load to be carried.”4

Julius Lehrkind needed specialty wagons designed to haul kegs of his beer to taverns and bottlers. The federal tax structure of the day made it difficult for brewers to do their own bottling, so beer was sometimes transported by keg to bottling plants5 such as the Lehrkind bottling plant in Livingston. Locating their brewery and bottling facilities near the Northern Pacific Railroad was evidently a carefully laid plan. Four draft horses pulled these barrel wagons loaded with some thirty-five barrels to deliver the product to customers across town and across the state.

Then tax laws changed, enabling the piping of beer directly to nearby bottling plants6. Soon motorized vehicles and trucks were becoming part of the beer transport industry. Sometime in the late 1800s–early 1900s, the horse drawn barrel wagons were being retired by the Lehrkind’s Genuine Lager Bozeman Brewery. Evidently Henry Woosley found himself a bargain. He picked up one of the wagons with what must have been some very stout draft horses of his own, and drove the big rig home to Sedan over Battle Ridge on a narrow, steep, dirt road. Once home, the top barrel-carrying part of the wagon was dropped off in a typical farm “boneyard” at the edge of a hay meadow. Lyle Woosley’s best guess is that that massive wheels and strong undercarriage were used another 30 years carrying loose hay in a hayrack they stuck on top. Then, some seventy years ago or so, the worn out wheels and undercarriage were dropped off in another forgotten swamp.

Back to the warm summer day in 2014 – Lyle Woosley and Dan Hurwitz drove out across the Woosley Ranch to scope out the odd remnants of the upper wagon. After several days of heavy duty hand digging they unearthed four fourteen foot long hardwood beams with steel on the top and bottom. Lyle was able to pull most of it off the ground with his skid steer and arrange it on a gooseneck trailer. Dan kept digging along with neighbors who crisscrossed the burial mound with a metal detector until they unearthed the heavy springs and all but a few “leaves” that go on the axels. Lyle and Dan then moved a few miles down country to scope out the axels and hubs, now barely visible and overgrown with thorny rose bushes and a wasp nest the size of a basketball. Most of the wood of the massive wheels, including spokes the size of a man’s arm, had rotted. But the four inch wide steel rims were still intact along with steel hubs big enough to straddle – about ten inches in diameter.

After more hand digging, the skid steer transferred all the remains to the trailer for delivery to Harlan Olson, who expressed interest in taking on the restoration. One wonders why Harlan was not just willing, but eager, to take on something as huge and challenging as a turn-of-the-century broken-up weather-decayed beer barrel wagon. He said, “It is unique. It is a rediscovery, excavated right out of the dirt of a Montana ranch. I just wanted to see it rebuilt.”

With the generous help of the Bozeman Lehrkind family, the barrel wagon went through several years of painstaking restoration. One cannot imagine the amount of effort and the level of workmanship that go into a project like this. Interestingly, when the steel was removed from the hubs, the complicated inner wood hubs were still in perfect condition with one exception, protected all those years by the steel so expertly crafted to cover them. The single replacement was made by Jem Blueher of Anvil in Livingston. With the exception of those three hubs, every piece of wood on the wagon had to be replaced. When he could, Harlan used the rotten wood remnants to guide his work. If one remnant was still recognizable, he could duplicate it, or work it end-to-end. He was able to use every piece of the steel undercarriage, although the salvaging, sanding and piecing together was endless. Sometimes the design of the undercarriage, and old screws and hinges, were clues as to the original design. He also worked from old photos and descriptions, and sometimes just instinct. The profile of the driver’s seat looks odd as it perches precariously high above the empty rack. This was a necessity, according to teamster Dan Hurwitz. “Imagine backing that vehicle up to a loading dock, maneuvering those four horses ahead of you and looking back over the top of three layers of stacked barrels at the dock location.” The painting is another job, all unto itself. Harlan has never advertised his business but is known in the trade across the country for his extraordinary professionalism and perfectionism with every project he touches. The barrel wagon is no exception with its five coats of paint, shiny as a mirror, and expertly trimmed with delicate pin striping. He and Joal say, “Quality is in the detail. You can tell this wagon was more remarkable than the standard Sears and Roebuck. When that vehicle leaves here, we want it to be just that special, and to have others recognize it is special at first glance, even if they are not quite certain why.”

Now in this autumn of 2017, this work of art and monument to history will roll into its next life. Unlike some restoration artists, Harlan is not a hoarder and doesn’t regret having it move out and on. His wish for its future – “I hope that it is cared for, and that many others get to see it.”